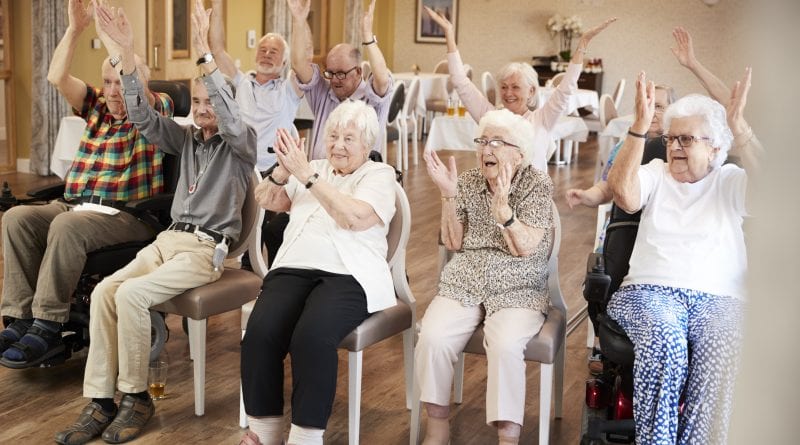 Inside Orchard Park, music beams on Tuesdays as the community’s residents gather to sing along to the piano; on those days, the senior residents have a sense of purpose. It has not been long since they were able to finally revive that purpose, as a broken piano and COVID-19 deprived them of these joys.

First, it was the COVID-19 restrictions that forced the residents to stay in their rooms with no group activities or interaction. After a year of distance, the residents grew lonely and were no longer leaving their rooms for activities. Music was their saving grace.

“They got used to [staying alone],” said Ruben Flores, life enrichment director at the retirement community. “Having something to come out for is the only thing that gets them out of their room these days.

”Orchard Park offers many activities to the residents, such as art and physical therapy, but that has not been enough to get the residents to come out and take part. When the residents were finally able to get together, the piano they sang along to, played by Jean Wood, broke. The piano notes were off-key, making it difficult for the residents to sing the high-pitch notes. Wood did not want to stand by as her students suffered without the music – she made it her mission to raise the money for a new piano. Wood sought the help of the women’s guild at Chapel in the Hills, where she is also a director of music. The women in her group were eager to help within days, they donated more money than she asked for.

“They were so excited, they just keep thanking me,” Wood said about the residents of Orchard Park. “I say I’m not doing anything special, just doing what I’m supposed to do.”The piano has brought residents a lot of joy. The afternoon gathering had 14 residents sitting in the room, practicing songs from the early 1900s such as April Showers, and raising their voices and their volume as high as possible. Some clapped along if they could not continue singing, but one woman could not keep her excitement in.

Irene Nixon has been a singer since childhood when she was part of a quartet with her sisters. When the words to April Showers ended, only two things remained; the music and Nixon’s voice, echoing the words.“We have a soloist,” Wood joked around with the group, “her name is Irene. It’s amazing anybody our age has that much air left.”Nixon was eventually called out of the room before the practice ended, and as she stepped out the door, her mouth kept moving, singing the songs she enjoyed.“Anything that can lift their spirits and take them out of their life and give them pride in what they do,” Wood said, “They were really having a good time enjoying themselves. That’s what we can hope for when we get old. When you don’t have anything new for several days you get depressed.”